If you have no time to go to the gym or think the gym membership is too expensive, then Weider power tower is something I recommend for you. This pull-up and dip station comes with all the typical workout stations, solidly built, and the best is that its price tag is fantastic.

Ok, it’s not the best pull-up tower in the world because it has some minor flaws, but for an average-level home workout, it will do for sure. If you are an ordinary wight and high person, who doesn’t need a super-duper machine, you won’t regret it.

Save money! It's on sale now 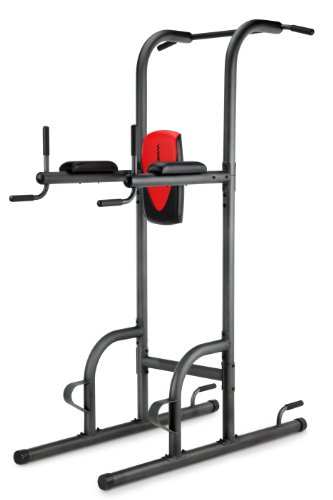 3,079 Read Reviews
Weider Power Tower Workout Station
Quick overview: Essentially, this power tower dip station is built for the average Joe, but it performs pretty well when it comes to bodyweight exercises that it was made for. It has 300 pounds capacity, 4 exercise stations and its price is unbeatable.
$199.00 −13% $172.20
Check at Amazon
Table Of Contents

What are the Weider Power Tower features and benefits?

Pull-up bar at the backside and has a high position

Towers are typically constructed so that the pull-up bar is at the front. This means, when we do chin-ups or pull-ups, we are between the dip bars. This can be a problem for broader guys because they don’t have enough room to move around. Mainly if the handlebars are close to each other.

However, the Weider tower has a multi-grip pull-up station at the back. This means the dip bars aren’t in the way. The pull-up bar is 84 inches high, tall enough to accommodate taller than ordinary people.

The pull bar on most power towers is 80 inches high, but it is 84 inches high on Weider. While that does not seem like too much, it may be ideal for tall people because it improves their training experience. Pull-ups and chin-ups should be done with bent knees, but your feet should not touch the ground. People over 6.3 feet have no problem using the tower.

A bit shaky, but not unbearable

According to the user’s weight, power towers often wobble a bit. Unless they have a unique base or are fixed to the floor, ultra-stable towers are extremely rare.

Weider towers have extended stabilizers that prevent the machine from tilting backward or forward. However, it can move to the sides at times.

Lighter people do not experience shaking. Heavy guys say it moves some, but they don’t think they could fall over.

Place the unit on flat ground and place a thick rubber mat under it to maximize stability.

Handgrips are provided at all workout stations. Thickly-cushioned armrests and back support are included with the vertical knee raise. With that in mind, even if you work out for a long time, your arms and hands will stay comfortable.

Vinyl is used to make the cushions found on the Weider Power Tower. The cushions are incredibly comfortable, easy to clean, and built-in so that they are highly durable and long-lasting.

The manufacturer claims the maximum weight capacity is 300 pounds, which is pretty good. As you will read below, I don’t recommend it for weights above 250 pounds because it isn’t made from high-quality materials. You won’t have any problems if you weigh under 200 pounds.

If you are a heavy guy or want to do advanced bodyweight exercises such as weighted pull-ups or dips, you should look for a more robust commercial power tower. Otherwise, it’s safe to use.

What are the drawbacks?

The assembly isn’t an easy task

There have been complaints about the Weider Power Tower’s assembly process.

Some customers report missing bolts, screws, or washers despite the ease of following the instructions. It has been reported that some screws don’t fit into the areas they are supposed to go into in the tower. According to another user, the uprights supposedly included in their order were nowhere to be found. According to what we have gathered, Weider seems to be having some quality control issues.

Weider’s customer service is also noteworthy. Some customers have commented that the customer service department is extremely disappointing and unprofessional. They don’t answer the emails, and it takes weeks to get the missing parts.

The warranty is only 90-days which isn’t good at all.

You cannot adjust the pull-up bar to your height because this exercise equipment isn’t adjustable. Short or tall people may find that particularly annoying. A short person may find it difficult to reach the bar. Also, taller people cannot raise the bar higher.

Furthermore, the back pad cannot be adjusted, which can be a problem for shorter people. When they get into the vertical knee raise, they can’t place their forearms comfortably on the arm pads as they get too far from the center.

How do you use the Weider power tower? Who is it for?

Just like any other tower out, their Weider can be used to perform the most beneficial power tower exercises such as pull-ups, chin-ups, dips, push-ups, and their variations. That means we can have a total upper body workout and build strong core muscles in the comfort of our home gym—a valuable multi-function gym equipment.

As I’ve mentioned before, this machine is made for the average user, not for professionals.

It’s mainly a good choice if you are on a budget since it costs around a hundred bucks.

When it is constructed, it is strong and looks good. Even though it cannot be compared to the solidity of gym equipment, it is still good enough for the average home. However, I was dissatisfied with the assembly process.

The tower does squeak and wobble a bit as I use it–this is not due to poor assembly on my part. It is securely and properly assembled. I use this tower on a daily basis, with no problems. There is no denying that the price was a plus, but you get what you pay for.

Back and elbow padding that feels comfortable

The warranty period is short.

It cannot be adjusted.

Buy on Amazon Buy on eBay

Hi! I'm Walter, a 36-years old gym owner. I've been working out since I was 15. Now I do calisthenics and boxing. On this website, I'd like to share my workout and home workout equipment tips.

Get Ripped with These Power Tower Exercises for Beginners

Read More »Get Ripped with These Power Tower Exercises for Beginners

Here you can find out about the best power tower alternatives that will help you to build muscle with bodyweight exercises at home.

You will learn what power tower exercises are and how to perform them. You will also learn how to use the pull-up dip station for an effective workout.